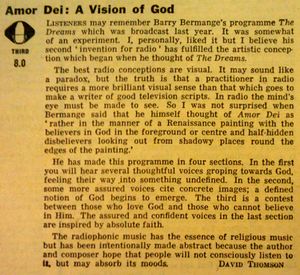 Amor Dei: A Vision of God is a newspaper article by David Thomson, Amor Dei's producer, which appeared in the Radio Times when the piece was first broadcast in 1964. It consists of a description of the piece and quotes Barry Bermange.

Listeners may remember Barry Bermange's programme The Dreams which was broadcast last year. It was somewhat of an experiment. I, personally, liked it but I believe his second ‘invention for radio’ has fulfilled the artistic conception which began when he thought of The Dreams.

The best radio conceptions are visual. It may sound like a paradox, but the truth is that a practitioner is radio requires a more brilliant visual sense that that which goes to make a writer of good televisions scripts. In radio the mind's eye must be made to see. So I was not surprised when Bermange said that he himself thought of Amor Dei as ‘rather in the manner of a Renaissance painting with the believers in God in the foreground or centre and half-hidden disbelievers looking out from shadowy places round the edges of the painting.’

He has made this programme in four sections. In the first you will hear several thoughtful voices groping toward God, feeling their way into something undefined. In the second, some more assured voices cite concrete images; a defined notion of God begins to emerge. The third if a contest between those who love God and those who cannot believe in Him. The assured and confident voices in the last section are inspired by absolute faith.

The radiophonic music has the essence of religious music but has been intentionally made abstract because the author and composer hope that the people will not consciously listen to it, but may absorb its moods.