An ABC in Sound 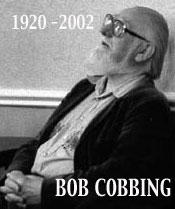 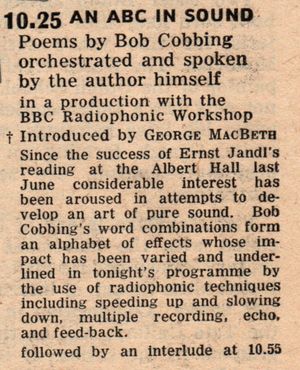 RT - An ABC in Sound

The Radiophonic Workshop helped Bob Cobbing produce a 20-minute[1] treated version of his work Sound poems: An A B C in Sound. Recorded in 1965,[2] it was broadcast on 7th January 1966.[3]

“Cobbing performed the poems at one of the regular readings held at the ICA, Dover Street, in 1964, organised by Bill Butler and Eric Mottram, which led, via Anthony Thwaite and George MacBeth, to the BBC Electronic Workshop version and Cobbing's first BBC broadcast.”[4]

“Bob Cobbing's word combinations form an alphabet of effects whose impact has been varied and underlined in tonight's programme by the use of radiophonic techniques including speeding up and slowing down, multiple recording, echo, and feed-back.”[5]

The work also gets called Alphabet Poetry, while Sono-Montage is a different, if similar, work based on the poetry of Rosemary Tonks.