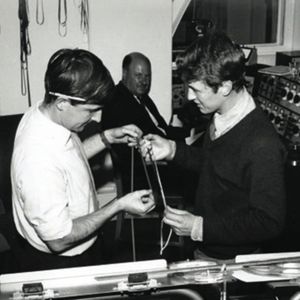 Brian Hodgson was Delia's closest friend and co-worker[1] at the Radiophonic Workshop from 1962-1973.

He worked with her on most of her moonlighting work while at the BBC, including ESL104 and the An Electric Storm albums.

In 1966-67, he worked with Delia and Peter Zinovieff as Unit Delta Plus and in 1972/73 they left the Workshop at the same time and he cashed in his pension to set up the Electrophon studio with her. She contributed to the soundtrack for The Legend of Hell House but left within the year.

Brian returned to the BBC and in 1983 became Head of the Radiophonic Workshop. From then on he spoke with Delia about once every six months.[2]

We were best mates. We used to go on holiday together.[3]

She always felt the limitations of the technology. It was so difficult, you were wrestling with it the whole time, and the deadline would be creeping up and there was no time if you had an idea and it wasn't working. There would come a point where you couldn't go back and try new ideas because the deadline was going to be there. It just took so long to do anything.[4]

She had these incredible ideas, but the technology wouldn't let her bring them to fruition. You were pushing the equipment beyond its ability to give you what you wanted, so everything was a compromise.[5]

Delia and I used to say there are arbits and omens, and that's how we worked. The arbit was an arbitrary length of tape which you inserted into something, that suddenly made it all work [...] and an omen was something that happened quite by accident: you'd drop a piece of equipment and it made a magic sound, or you'd fall over something or somebody would spill something on something or a joint would suddenly break in a piece of tape and something magic would happen.[6]

Delia was supposed to join me [at Electrophon] but she was not in the right state; she was not really at her most creative at that point. She seemed almost on the edge of a breakdown, of really not knowing what she wanted to do and feeling the pressures were all too great.
She did a little bit on The Legend of Hell House but not very much. Once we started Electrophon she really opted out and eventually was a radio operator on the gas line they were putting in all over the country.[7]

I managed to get her onto a composer's desktop programme. But she couldn’t cope with it and spent most of the weekend in tears. I think probably realising just how much time had been wasted, how it was gone and she couldn't get it back.[2]

One night many years ago, as we left Zinovieff's studio, she paused on Putney Bridge. ‘What we are doing now is not important for itself,’ she said, ‘but one day someone might be interested enough to carry things forwards and create something wonderful on these foundations.’