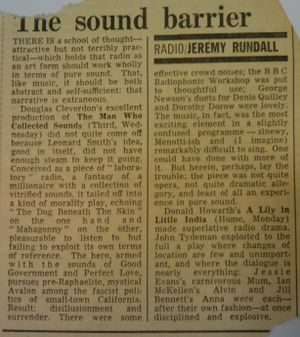 DD110156 is a newspaper review of Douglas Cleverdon's production The Man Who Collected Sounds for which the Radiophonic Workshop provided sound.

THERE IS a school of thought--attractive but not terribly practical--which holds that radio as an art form should work wholly in terms of pure sound. That, like music, it should be both abstract and self-sufficient: that narrative is extraneous.

Douglas Cleverdon's excellent production of The Man Who Collected Sounds (Third, Wednesday) did not quote come off because Leonard Smith's idea, good in itself, did not have enough steam to keep it going. Conceived as a piece of “laboratory” radio, a fantasy of a millionaire with a coolection of vitrified sounds, it tailed off into a kind of morality play, echoing “The Dog Beneath The Skin” on the one hand and “Mahogany” on the other, pleasurable to listen to but failing to exploit its own terms of reference. The hero, armed with the sounds of Good Government and Perfect Love, pursues pre-Raphaelite, mystical Avalon among the fascist politics of small-town California. Result: disillusionment and surrender. There were some effective crowd noises; the B B C Radiophonic Workshop was put to thoughtful use; George Newson's duets for Denis Quilley and Dorothy Dorow were lovely. The music, in fact, was the most exciting element in a slightly confused programme -- sinewy, Menotti-ish and (I imagine) remarkably difficult to sing. One could have done with more of it. But herein, perhaps lay the trouble: the piece was not quite opera, not quite dramatic allegory, and least of all an experience in pure sound.