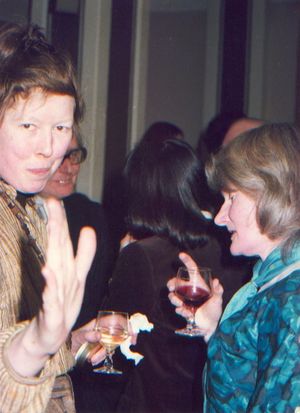 Delia and Daphne at a BBC party

Daphne Oram was one of the founders of the Radiophonic Workshop in 1958 but left within a year, long before Delia arrived. They are known to have met at a BBC party, maybe in the 70s, maybe in 1983[1]

Daphne Oram's unfortunately on her last legs, she's had several strokes. We're hoping to put some of her music out as well. Delia has been in touch with her for a long time, and, they're keen for someone to put out their stuff.[2]