Difference between revisions of "Egypt" 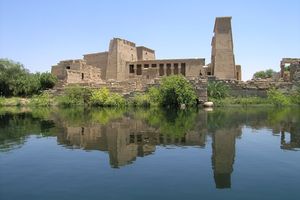 Delia provided music for the Egypt item in a BBC one-off programme Chronicle Magazine: Egypt, Rome and Britain, produced by Julia Cave and broadcast on the 25th August 1972.[1]

The item's subject was "Egypt: The famous temples on the island of Philae are being drowned by the Aswan High Dam - UNESCO has a plan to save them."[1]

Other works of Delia's regarding Egypt are:

The relationship between all these works is unclear and for the moment we list all tapes and papers referring to Egypt on the page for Tutankhamun's Egypt.

Delia produced at least four Egyptian-themed works in 1972. These are the tapes for all of them.