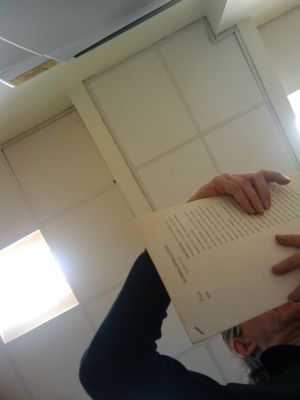 Martin Guy is the one writing most of this wiki. I never met Delia, but realised, when I first heard her name at age 40, that she had provided some of the most stimulating music I had heard throughout my life.

I was born in 1964, so from age 5 I would first have heard her music as title themes, incidental music and dances for the BBC Schools' programmes in the late sixties.

As a teenager in the 70's, of course I loved Doctor Who and had a similar fascination for an ITV series, The Tomorrow People, whose music and effects were got by "caning" one of her albums, ESL104, then, while a university lecturer at age 25, I was enthralled by a copy of the album An Electric Storm.

When I first heard her name in 2004 she was already dead but since then she has visited me in dreams many times, always a positive, encouraging, sometimes delighted figure.

Now, all good fables start with a disgrace, and the rest of the fable is the story of how the disgrace is put right.

In this case, the disgrace is that Delia, with excellent technical and cultural preparation, a creative musical ear and the enthusiasm to work long hours creating beautiful and revolutionary music, was almost never given credit for her music, and thus her career was wrecked. Furthermore she seems to have been driven mad by a series of exploitative men, burnt out after just over a decade and spent the rest of her life lonely, half mad and alcoholic, believing her name to be unknown and her music unheard.[1]

My first attempt to correct this disgrace was to take inspiration from a single phrase on delia-derbyshire.org:

“A complete list of her works has yet to be compiled”

so I thought I'd try.

At the time, in April 2004, I had just started a three-week session as a "Visiting Guest Artist" at the Graz Medienkunstlabor so I dedicated those weeks to finding as much of her music as possible. The index to that collection of MP3's became the Audiological Chronology, a single page of HTML.

In April 2008, I made a pilgramage to Manchester University and was able to spend a day and a half studying her box of 1000+ papers. Calculating that I had 34 seconds per sheet, I could do nothing but photograph them with my phone so as to be able to devote the necessary time at home. Once I had rotated them all, selected the best of the three snaps of each and published a crude index of thumbnails, Geoff Woolfenden of Manchester University's legal department wrote threatening "action" if I didn't take them down, so anxious they are that no one but the privileged few should be able to study them.

The study of newspaper articles and interviews, the existing video and audio recordings of Delia speaking and especially her papers have brought to light dozens of otherwise unknown and unavailable examples of her music and point to the existence of surviving copies of several others, while mentioning hundreds of others.

For some other pieces, the rhythm and harmony have been reconstructed from her scores without knowing what the instrument should be - see Category:Score.

I am currently [August 2014] working on correcting a second disgrace, that most of her music has in fact survived but has never been published, f it was aired at all. What survived on the 257 tapes found in Delia's attic after she died has been digitized but nothing published her music for over a hundred television and radio programmes is fading away in a single copy on magnetic tapes at the BBC.

I launched a Petition for the BBC to publish what it can. They replied saying that there is very little finished music there and that it is mostly make-up sounds. This is a lie: there are finished master tapes for 124 complete programmes, two unpublished interviews. See the page TRW.

It turns out that there are so many that it makes little difference to the length of the finished album if they publish only the unpublished ones or a complete Deliaology.

As for her non-BBC music on the Attic Tapes, you currentle have to physically visit Manchester University in the UK, hoping that they will let you hear some of the tapes, which is impractical for anyone except fee-paying students and favoured ones. Someone should just put it all on the peer-to-peer file sharing network but so far no one able to has taken the initiative.

How will the fable end?