Difference between revisions of "The Afterlife" 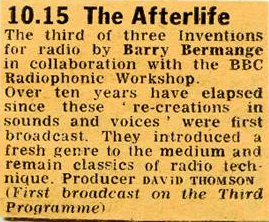 A Radio Times entry for The Afterlife

The Afterlife ("The Great Adventure")[1] is the third of four Inventions for Radio by Barry Bermange for which Delia created the electronic musical backgrounds.

The third in a cycle of inventions for radio by Barry Bermange, in collaboration with the BBC's Radiophonic Workshop. Produced by David Thomson. "This programme is an attempt to reconstruct in sound the spiritualistic vision of Death and Eternity. It is conceived as a dream of Death. Using the montage process of his earlier programmes, 'The Dreams' and 'Amor Dei', the author has arranged in settings of electronic sound a collection of voices recorded from life. There are four movements." Radio Times. "Actuality" voices recorded in co-operation with the Old People's Welfare Council, Hornsey.[2]

It is in four movements:

and an abridged "transcription" version was prepared for broadcast outside the U.K.