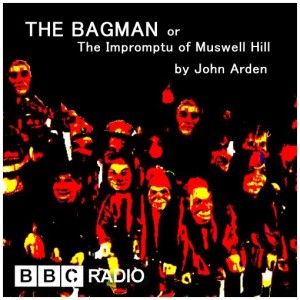 Delia produced electronic music and effects for the BBC's 1970 production of The Bagman or The Impromptu of Muswell Hill, a radio play by John Arden, directed by Martin Esslin. The presenter for a repeat broadcast says: "In it, in the form of a dream, some of the problems facing a socially conscious playwright in our time are described."

The play is one hour and 28 minutes in length and is described as a "Witty Fable" and a "modern version of Molière's Versailles Impromptu"[1].

John Arden has a dream in which he meets an old woman who sells him a canvas bag, "A pig in a poke", he then finds himself transported to a dystopian land where the people are starving while the rich live in idleness and squalor.[2]

A note in her papers says that The Bagman was entered by the BBC for the Italia Prize 1970 and that she was scheduled to receive 20% of the prize money if the play should win.[3]

The Radiophonic Database credits it to Delia and Malcolm Clarke,[4] and the Performing Rights Society's list of works by Delia Ann Derbyshire has:

The moments with Delian music and effects are: