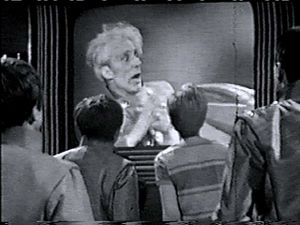 Delia is credited at the PRS with the music for a story in the Doctor Who series called The Macra Terror, broadcast from 11 March to 1 April 1967.[1]

This includes Chromophone Band, with which the series opens, and a range of strange musical backgrounds following the aliens' dictum "We regulate our day by music."

Only stills and/or fragments of the TV series are known to exist.[1]