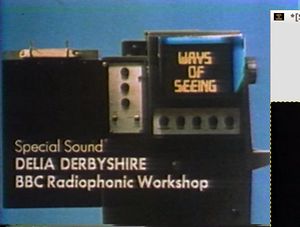 Delia is credited with "Special Sound" for the fourth and final part of a BAFTA award-winning 1972 BBC series of programmes Ways of Seeing, produced and directed by Michael Dibb,[1][2] in which John Berger "analyses the images of advertising and publicity and shows how they relate to the tradition of oil painting - in moods, relationships and poses."[3]