Wildlife Safari to the Argentine 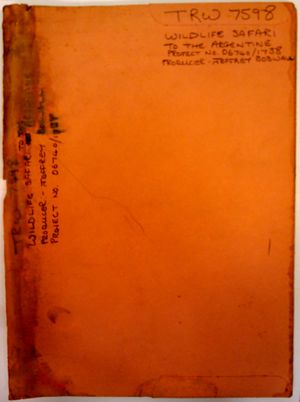 DD145456: Delia's orange folder "TRW 7598: Wildlife Safari to the Argentine" containing her papers for it

Delia created the title music and sound for a BBC Network TV programme Wildlife Safari to the Argentine produced by Jeffery Boswall for BBC TV Bristol.[1]

Delia seems to have been very pleased with the result, as in one of her pages of notes, she writes "Tell Roger to remind me to jump up and down with delight".[3]

Stefan Pstrowski seems to have helped out in a managerial role and Robin Prytherch prepared a tape for Delia with over 60 animal sounds, which they heard together in the afternoon of the 22nd May 1972.[4]

The film is mentioned twice on the net:

The Audobon Wildlife Film lectures sponsored by the Baltimore Chapter of MOS will consist of the following programs in 1981-1982:
...
Apr. 23, Fri. - "Wildlife Safari to Argentina" - Jeffrey Boswall[6]

"The BBC Natural History Unit at Bristol provided two excellent films: the Oven-bird from 'Wildlife Safari to Argentina', and 'the Private life of the..."[7]