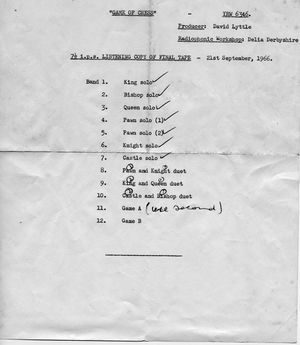 A Game of Chess - listening copy of final tape

Delia created a "chess ballet" for a schools radio programme

A Game of Chess was a dance drama intended to provide stimuli for improvised, stylised movements freely created by students, based on the characteristics suggested by the names of the pieces in the classic game of chess.
For 'advanced' teachers who had sufficient floor space and the correct number of students to fill a marked-out chessboard with a full set of 'pieces', and who had the patience to work out the necessary detail of the 'clues' in the music of both games, there was in actual fact a proper game of chess to be played out.[1]

The concept was by Derek Bowskill and it was produced for the BBC by David Lyttle.

The broadcast piece was Game A, which received a lot of pleasing feedback.[1]

Its TRW tape number places it between Out of the Unknown and The Evenings of Certain Lives, which are both from 1965, while Delia's "listening copy of final tape" memorandum dates the completion of the work to 16th September 1966.[2]