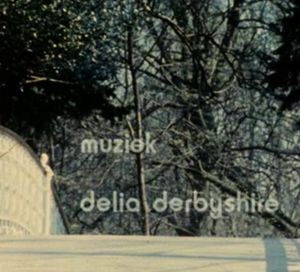 Delia made music for third film by Madelon Hooykaas and Elsa Stansfield, About Bridges (1975). The original Dutch title is Overbruggen.[1]

About Bridges shows the perception and the experience of bridges in three different ways: by the artist, the worker and the user. The film is presented as a cinematic equivalent to the experience of crossing a bridge. The film was conceived and shot in Amsterdam, a city of bridges, and follows three interwoven working themes.

The only surviving copy of Delia's music for About Bridges (and One Of These Days) was Madelon Hooykaas' copy on half inch tape which Madelon said were to be given for conservation and distribution to the EYE Film Museum in Amsterdam.[2]

It all begins with ... how you feel on a bridge ... it's something that comes out of yourself ... you see how other people are busy ... and how you experience it yourself ... and so it becomes something about people.

Today I was looking at some photos ... which I may use to make a silkscreen.
With them all there I was still missing something ... that feeling of moving water as it comes together ... in the sky and on the horizon.
It's not there on the photos ... maybe because the bridge was high and I was looking down ... towards the people who were working on the water ... they were labourers ... groups of workmen busy working on the bridge.

This is the last of three film musics that Delia created for Hooykaas and Stansfield. The other two are Circle of Light and Een Van Die Dagen.