From WikiDelia
(Redirected from Cyprian Queen)
Jump to navigationJump to search

Delia created the music for a 1964 radio[1] programme catalogued as The Cyprian Queen (The Singing Bird), produced by Michael Bakewell.[2]

We did a play called The Cyprian Queen. Delia created a marvellous kind of strange, unearthly flute music.[3]

Who is the Cyprian Queen?

In Euripides' play Hippolytus, the Cyprian Queen is mentioned:

She stands here at thy gate the Cyprian Queen!

and in his Medea the Chorus of Corinthian Women have a line:

When in excess and past all limits Love doth come, he brings not glory or repute to man; but if the Cyprian queen in moderate might approach, no goddess is so full of charm as she.

Robert Graves, in The Golden Fleece, identifies the Cyprian Queen with the triple goddess or the White Goddess:

I am the Triple Mother of Life, the mistress of all elements, the original Being, the Sovereign of Light and Darkness, the Queen of the Dead, to whom no God is not subject. I rule the starry skies, the boisterous green seas, the many-coloured earth with all its peoples, the dark subterrene caves. I have names innumerable. In Phrygia I am Cybele; in Phoenicia, Ashtaroth; in Egypt, Isis; in Cyprus, the Cyprian Queen; in Sicily, Proserpina; in Crete, Rhea; in Athens, Pallas and Athena; among the pious Hypoboreans, Samothea; Anu among their dusky serfs. Others name me Diana, Agdistis, Marianaë, Dindymene, Hera, Juno, Musa, Hecate.

while the programme notes for a Barbican, London production of Handel's Theodora say that the Cyprian Queen is the goddess Venus:

Valens leads the Romans in the sacrifice to Jupiter, also honouring Flora and Venus (‘the Cyprian Queen’), the goddesses of beauty and love.

The Strange Unearthly Flute is the horizontal lines above the spoken voiceprints. 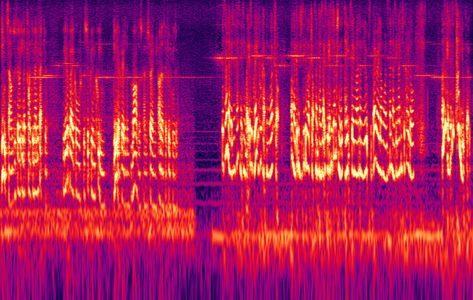