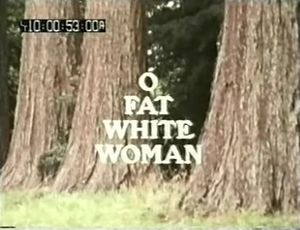 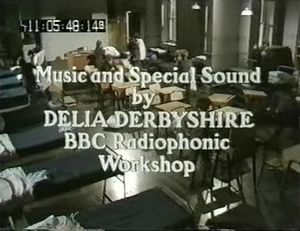 O Fat White Woman (1971)[1] is an 80-minute television play produced for the series Play For Today. The play was written by William Trevor and directed by Philip Saville.

The title of the play is taken from Frances Cornford's poem:

and the play is a “dark and unsettling drama focussed on the world of a sadistic Headmaster, his neglected wife, and the vulnerability of the children in his care...”[2] Delia created score and voice treatments using the Delaware synthesizer[3] and a review in The Guardian said that the play's tense narrative was “sharpened with Delia Derbyshire's radiophonic raw-nerve noises”[4]

The following tracks by Delia are used in the play (the names are invented by me):

An alternative analysis[2] identifies and gives names to six pieces forming this work:

David Butler says of these:

The first tape runs to 21.15 minutes - but it's not music alas. The tape is a recording of a studio session: recording speech for a voice montage and presumably other voice-over sequences used in the production. The tape contains different takes, studio banter and direction from Philip Saville, the Cornford poem and some improvised random dialogue in French.

The second tape is the one where Delia comes in - it runs to 10.48 minutes and is principally made up of elements of speech from the studio recording but electronically treated to give them a non-naturalistic, subjective quality. The only music on this tape is some extremely brief fragments of slow organ music at the outset (and by brief I mean 9 seconds!) and then some brief organ chords punctuating the spoken word.[5]