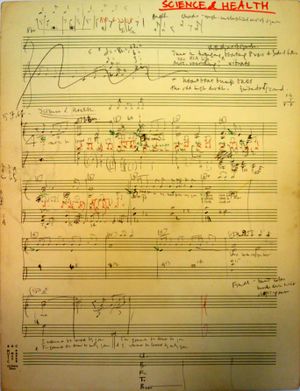 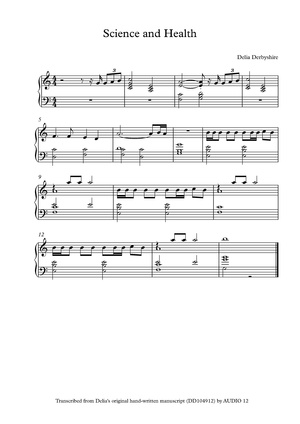 In 1964, Delia created a 57-second signature tune for a BBC radio series 'For Schools - Health and Science', which she named Science and Health,[1] "a succession of tumbling chords, descending with an elegance beyond almost anyone else."[2]

The programme was actually called 'For Schools - Health and Science', not 'Science and Health'. The Radio Times listing initially only credits the programme as "compiled by Michael Smee."[3] Later in the series, the Radio Times provided a fuller credit. "Reproduction 4: Bringing up children by Michael Smee Series produced and edited by Elizabeth Kilham Roberts"[4]

The Producer named in the tape library is Mrs E H Kilham Roberts. Elizabeth Kilham Roberts had a background as a chemistry graduate and science teacher and joined the BBC during WWII as an administrator.[5]

Science and Health appeared on BBC Radiophonic Workshop 21 with the subtitle "Mike's Choice", where the sleeve notes state:

[In making Ziwzih Ziwzih OO-OO-OO] I used just this one bar repeated which had [previously] been rejected from a science and health program for being too lascivious for the schoolchildren. It was like a science program... it was supposed to be about sex, but under another name. And then the producer had the nerve to turn down my music, saying it was too lascivious. It was just twangy things with electronic pick-ups, and I just used a single note and then did little glissandos on it and pitched it and treated it.[6]

It is not totally clear whether the Producer of the infamous "lascivious" comment was Kilham Roberts or Smee. The subtitle used on BBC Radiophonic Workshop 21 could be read as ironic, but it seems more likely that the credited Producer and ex-teacher Kilham Roberts, who was from an older generation, not the actor Michael 'Mike' Smee, was the one.

In a draft version of the script for the Reeling and Writhing play, scriptwriter Nicola McCartney has the following dialogue about the event:

The following lyrics were planned by Delia, fitting the melody of the piece[7]

but the versions released on disc are purely instrumental.

Here it is, typeset using Sibelius as PDF and MIDI files: Science and Health (score)