The Business of Good Government 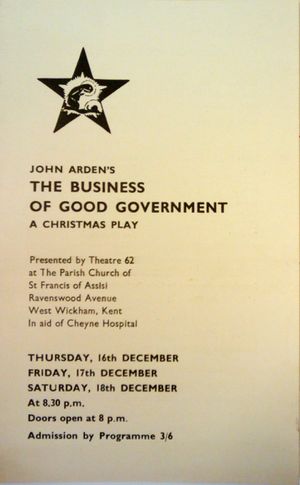 Delia's papers contain a programme for Ian Cotterell's production of John Arden's play The Business of Good Government for Theatre 62, an amateur theatre production company based in Kent,[1] with sound by Unit Delta Plus, in which she is credited with composing the soundscore.

It was performed at the Parish Church of Assisi, West Wickham, Kent on Thurday 16th, Friday 17th and Saturday 18th December[2], whose weekdays and dates match in 1965.

A letter from Ian Cotterell[3] to Delia suggests she create the following four pieces for it:

and in her notes she plans three sounds:[4]

The BBC had already made a radio adaption of the play which was broadcast on 16th December 1964,[6] though there is no evidence that Delia had any involvement with that. In its Radio Times entry, Ian Cotterell is not mentioned.[7]

From the theatre programme:[8]