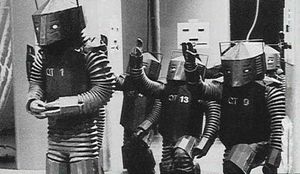 Praying robots in a screenshot from the production 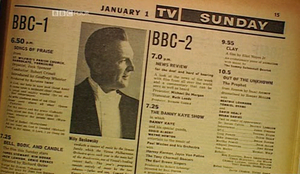 The Radio Times entry for the first broadcast 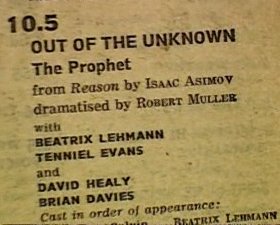 Detail of the Radio Times entry

Written as theme for an episode of "Out of the Unknown" based on Isaac Asimov's short story Reason[1] in which automata rebel against humans and worship God in an energy converter.[2]

Based around a resplicing of Science and Health, [it] is her most terrifying moment, tumbling into a nightmare, the sound of childhood at its most chilling.[3]

Most of the programs that I did were either in the far distant future, the far distant past or in the mind. I think this was the climax of a science fiction play called "The Prophet". It ended up with all these robots and they sang a song of praise to this bloke, presumably the prophet, and this was the song they sang. It is difficult to pronounce because it's made from backwards chanting and I think if you play it forwards it would say something like "Praise to the master, his wisdom and his reason" and I just chose the best bits and "Ziwzih Ziwzih", "his wiz, his wiz": it's that backwards. And I must say that the Oo-oo-oo is electronic! I think it was at the same time as one of the Beatles' songs, "Please please me", and so that was like, I think, er, Drew said he thought it sounded medieval. Well that was because it was like a new religion and they'd go back to square one and the perfect fifth as the greeks did. And so my oo-oo-oo's were done on the Wobbulator.[4]

I did the music for the whole programme. It was probably in the mid '60s. [...] I never watched the stuff. I had a script, that's all. The actors, I got them to chant. The words they were singing were, "Praise to the master, his wisdom and his [reason]" [...] I turned it backwards first, then chose the best bits that sounded good backwards and would fit into a rhythm, and then speed-changed the voices. Then I used just this one bar repeated which had [previously] been rejected from a science and health program for being too lascivious for the schoolchildren. It was like a science program... it was supposed to be about sex, but under another name. And then the producer had the nerve to turn down my music, saying it was too lascivious. It was just twangy things with electronic pick-ups, and I just used a single note and then did little glissandos on it and pitched it and treated it. But the 'Ooh-ooh-ooh' isn't me... that's wobbulator, pure wobbulator. That's a piece of test equipment that does wave sweeps.[5]

The only surviving footage of the episode are the following "telesnaps"