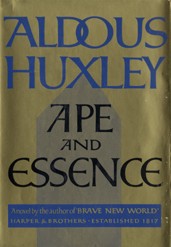 Delia created music for Ape and Essence, an episode of the series The Wednesday Play produced by David Benedictus.

Its master tape was checked out of the 1st of February 1966 and it was broadcast on the 16th of May the same year.

It is based on a novel of the same name by Aldous Huxley in which:

On this day in 1964, on the Third Programme, a radio dramatisation of the author’s satire ’Ape And Essence’, Produced by D.G. Bridson, a remarkably versatile writer, producer and director (a regular here on the Radio 3 Tumblr). The production came less than a year after Huxley’s death and starred Michael Kilgarriff (who later, famously, played the Cyber Controller in Dr Who), Betty MacDowall, André Morell, Errol MacKinnon, Ann Murray, Marvin Kane and Ralph Truman. The narrator was Norman Claridge.[2]

The notes to the tape's catalogue entry say that it had been "previously shown as Ninety Double Martinis", which is the title of a 1963 book by Thomas Hinde.[3]

Delia usually refers to the piece as Ape and seems to have reused it, or the makeups for it, for the 1967 Brighton Festival. Her preparatory notes for the festival say:[4] 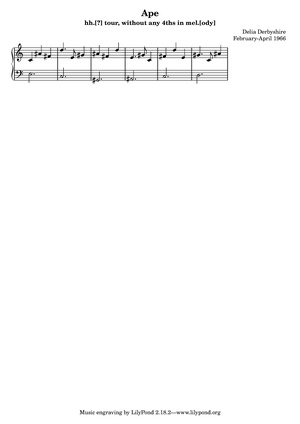 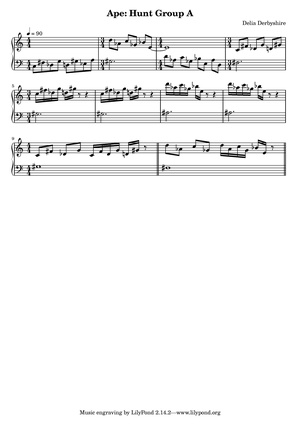 This is a reconstruction of Delia's score for the "Hunt Group A" phrases of Ape, made by combining DD122833 and DD122859. It consists of several thematic fragments, which appear to be waiting to be made into tape loops and combined to create a complete piece. The speed of the piece comes from Delia's writing on DD122833 saying that 15 crochets should last ten seconds.