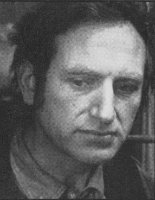 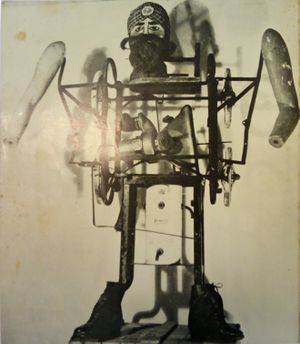 One of Bruce's humanoids

Delia created music for the 1965 Brighton Festival, alongside “performances by Bruce Lacey and his robots."

Bruce Lacey
Born Catford, London, 1927. Left school at 13 and worked in an explosives factory for one year, then worked as a bank clerk for two years Joined the Royal Navy and was an electrical mechanic. In hoospital for eighteen moths and studied painting as occiupational therapy. On recovery studied at Hornsey School of Art for three years, then studied painting at Royal College of Art, 1951-1954. Won Knapping Prize, 1951. Won Abbey Minor award, 1954. Took part in a six-man show at Gimpel Fils Gallery, 1953. One-man show of gouaches at Prospect Gallery, 1955. Made props for TV shows. Became eccentric comic actor in cabaret films and TV, eventually starring in ‘An Evening of British Rubbish’ with The Alberts, at the Comedy Theatre, 1963, using Electric Man Mark I and Clockface.[1]