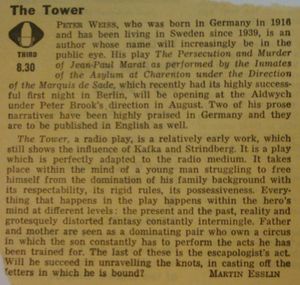 DD110224 is a newspaper clipping, presumably from the Radio Times, announcing the broadcast of The Tower on the Third programme, with a description by Martin Esslin.

Peter Weiss, who was born in Germany in 1916 and has been living in Sweden since 1939, is an author whose name will increasingly be in the public eye. His play The Persecution and Murder of Jean-Paul Marat as performed by the Inmates of the Asylum at Charenton under the Direction of the Marquis de Sade, which recently had its highly successful first night in Berlin, will be opening at the Aldwych under Peter Brook's direction in August. Two of his prose narratives have been highly praised in Germany and they are to be published in English as well.

The Tower, a radio play, is a relatively early work, which still shows the influence of Kafka and Strindberg. It is a play which is perfectly adapted to the radio medium. It takes place within the mind of a young man struggling to free himself from the domination of his family background with its respectability, its rigid rules, its possessiveness. Everything that happens in the play happens within the hero's mind at different levels: the present and the past, reality and grotesquely distorted fantasy constantly intermingle. Father and mother are seen as a dominating pair who own a circus in which the son constantly has to perform the acts he has been trained for. The last of these is the escapologist's act. Will he succeed in unravelling the knots, in casting off the fetters in which he is bound?