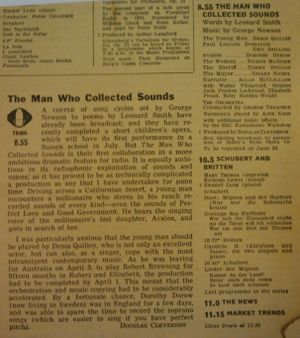 DD110532 is a newspaper clipping of a Radio Times article by Douglas Cleverdon about The Man Who Collected Sounds.

The Man Who Collected Sounds

A couple of song cycles set by George Newson to poems by Leonard Smith have already been broadcast; and they have recently completed a short children's opera, which will have its first performance in a Sussex school in July. But The Man Who Collected Sounds is their first collaboration in a more ambitious dramatic feature for radio. It is equally ambitious in its radiophonic exploitation of sounds and voices; so it has proved to be as technically complicated a production as any that i have undertaken for some time. Driving across a Californian desert, a young man encounters a millionaire who sores in his ranch recorded sounds of every kind--even the sounds of Perfect Love and Good Government. He hears the singing voice of the millionaire's lost daughter, Avalon, and goes in search of her.

I was particularly anxious that the young man should be played by Denus Quilley, who is not only an excellent actor, but can also, as a singer, cope with the most intransigent contemporary music. As he was leaving for Australia on April 3, to play Robert Browning for fifteen months in Robert and Elizabeth, the production had to be completed by April 1. This meant that the orchestration and music copying had to be considerably accelerated. By a fortunate change, Dorothy Dorow (now living in Sweden) was in England for a few days, and was able to spare the time to record the soprano songs (which are easier to sing if you have perfect pitch).