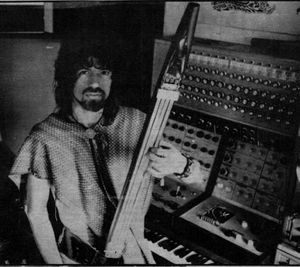 Delia: I was giving a lecture at Morley College in London and he came up to me afterwards. He played the double bass, the same as I did, and he was already doing tracks for the Ballet Rambert and we got together and started this album.[1]

David Vorhaus: I guess it [my interest in electronic music] started around 30 years ago when I met Brian Hodgson and Delia Derbyshire, who were then in a band called Unit Delta Plus. I was on my way to an orchestral gig when the conductor told me that there was a lecture next door on the subject of electronic music. The lecture was fantastic and we got on like a house on fire, starting the Kaliedophon studio about a week later! [2]

Brian Hodgson: Kaleidophon was David Vorhaus and Delia and me. David Vorhaus picked us up at a lecture we did with [Peter] Zinovieff at Goldsmith's College and he and Delia took one look at each other and decided they were madly in love, so we set up Kaleidophon in Camden Town.[3]