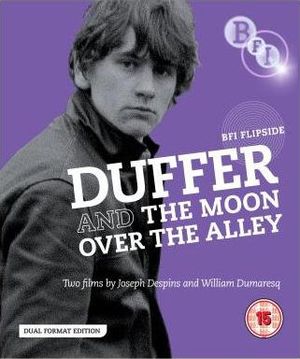 The sleeve notes for the DVD of a 1971 film Duffer

“An intense and bizarre study of obsession that is by turns lyrical and disconcerting, Duffer tells the deranged story of a teenage boy torn between the womanly charms of a kindly prostitute, and the relentless, sadistic attentions of an older man.”

say that Delia provided sound effects for it:

From its running voice-over to the weird, artificial background tape-loops of passing traffic, the entire Duffer soundtrack is a piece of sound art, combining MacDermot's compositions with more avant'garde interventions, such as the acrid, Ligeti-like high-string dissonances when Louis Jack is draping worms on Duffer's stomach, or the ghastly Moog synthesizer buzz that flares up when Duffer spies Your Gracie entertaining a client.[1]

Also riding high at the time was composer Galt MacDermot, whose career in musical theatre reached its peak in 1967 with the controversial hit, Hair. MacDermot, a friend of Dumaresq's, contributes a smattering of musical interludes for piano which greatly assist the film's trajectory from downbeat weirdness to fragile charm, concluding with a mournful nocturne that almost succeeds in making the South Bank's concrete architecture (where the final scenes were shot) sing with a sweet ache of sorrow and resignation. Add to this some electronic contributions from the BBC Radiophonic Workshop's celebrated Delia Derbyshire, working off-the-record here, and you have a soundtrack that graces every beat of a complex emotional journey, rounding off a truly accomplished debut feature.[1]

There were certain night scenes where I felt the new synthesizer machine at the BBC Radiophonic Workshop would be effective. Radiophonics supplied several effects which I laid over the appropriate sequences; they worked extremely well.[1]

Sounds of rushing wind and electronic howls dominate the scene, part of a very experimental sound collage that includes the rantings of Louis Jack and the electronica (momentarily simulating traffic in one scene - four years before Kraftwerk would turn such sounds into a new form of pop) of the BBC Radiophonic Workshop's Delia Derbyshire.[2]

"There was this monkey on a stick that Your Gracie had, and when I piled into her she'd start it. The idea was that the monkey should get to the bottom before I was finished but I never could somehow last long enough. I tried, God knows!"

Duffer's male lover covers him in worms to make a film.

Duffer sees his female lover in the arms of another man.