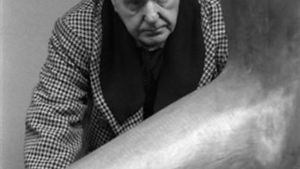 I Think in Shapes (screenshot)

Delia is credited with music for I Think In Shapes in the series Henry Moore at the Tate produced by John Gibson, first broadcast on 27th August 1968.[1][2][3]

"The retrospective exhibition of Henry Moore's life's work, arranged by the Tate Gallery in 1968 to celebrate the artist's seventieth birthday. Henry Moore walks among, touches, and speaks about his creations."[4]

and the BBC programme listing says:[1][2]