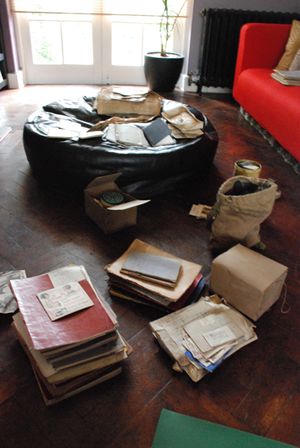 A bundle of Delia's papers and things turned up when someone moved into the house in Coventry where Delia lived when she was young, and where her mother continued to live. It is now at the John Rylands Library in Manchester with catalogue entry GB 133 BDD.

The Rylands Library catalogue's description of the collection says:[1]

The collection consists of papers which were generated and accumulated by Delia Derbyshire as a child - both at home and at school. These include school notebooks and papers, drawings, news cuttings, cards and a small number of objects.

Probably the most significant items are the school exercise books dating from 1948-53 which include notes, exercises and assignments in various subject areas. There are numerous mathematics books - shedding light on Derbyshire's early interest in this subject which she went on to study at Cambridge before switching to music, and which also informed and inspired her compositions. Music notebooks are also represented, revealing the composers she was familiar with or interested in at the time; her English exercise books contain original compositions, notes on writers she studied, and essays and assignments which reflect Derbyshire's early views on a range of subjects.

The news cuttings reveal an interest in her local area and a teenage enthusiasm for following news stories about members of the British royal family. There are also one or two pieces relating to music - and one posthumous item relating to Derbyshire's school days. The printed material includes numerous prayer cards, reflecting Derbyshire's Catholic background. The objects include some artefacts of great resonance - among them two Home Guard helmets and three gas masks - including one in a child's size, presumably Derbyshire's own; the bombing of Coventry and her evacuation to Lancashire both had a profound influence on the music she would compose in later life.

For myself, the most interesting item of what is here is the Wireless Programmes essay in which Delia deplored the move in BBC radio programming from brain-stimulating music to mind-numbing drama, a strange premonition of the experience she would later have herself at the BBC.