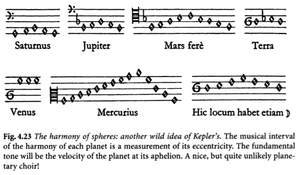 The title of the episode is taken from Kepler's epitaph:[3]

I measured the skies, now the shadows I measure,
Sky-bound was the mind, earth-bound the body rests.

Kelper had invented a system whereby the orbits of the planets corresponded to musical tones and Delia used this as the basis for her musical realization of his ideas.

The theme was based on a 16th-century composition by the astronomer Kepler, called “Harmony of the Spheres,” which was electronically treated to provide the science fiction sound associated with the programme. Kepler had interpreted the sounds made by the planets into scale notes, and Delia subjected them to her own gliding scale of electronic sounds.[4]

“While the air-raid sirens and bombing sounds of Delia's youth in wartime Coventry certainly shaped her music, this piece makes that influence explicit. This rare recording has only ever been released on an EMS promotional record.”[5]

I was there [in Coventry] in the blitz and it's come to me, relatively recently, that my love for abstract sounds [came from] the air-raid sirens: that's a sound you hear and you don't know the source of as a young child... then the sound of the "all clear" - that was electronic music.[6]

Its tape's catalogue entry is dated January 1970, and on 10th March 1970 the series' director, John Glenister wrote to Briscoe congratulating Delia for her work:

I could not have been more pleased with the results. I thought I might be asking for the impossible, to restrict Delia's musical talents within the constraints of what had already been established. [...] His primitive ideas on 'The Harmony of the Spheres' were realized with incredible sensitivity and emotive power by Delia's music. Please pass on my sincere thanks and admiration.

Music of Spheres is not to be confused with a different piece of music that Delia created for Bronowski's BBC TV series The Ascent of Man episode 5: Music of the Spheres.