Spectrograms of the call of the Common Swift

From WikiDelia
Jump to navigationJump to search
This page has nothing to do with the WikiDelia; I needed to put it here to make playable versions of this study available.

The polyphonic call of the Common Swift

The last few years, I've helped fallen Common Swifts grow and fly again, and In some of the 45-minute breaks I had between feeding them, I recorded some of their chirping, hoping to learn their language.

Instead I found another marvel: they sing more than one note at a time.

Here's the third of a ten-second sequence of fourteen trills from Rondone #3 of 2018. 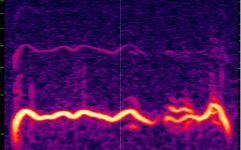 The bottom of the spectrogram represents 3386Hz, the top 16106Hz and the clip lasts 0.4 seconds. The yellow line is the main song ranging from 4000 to 4500Hz and the fainter line above is the first harmonic of that tone, from 8000 to 9000Hz, but what is that short line 500Hz above the fundamental?

Here it is again, slowed down by eight times, which drops it by three octaves so that we humans can hear it better and slows it down that our slow brains can follow it. They're not harmonics of anything; it's a chord of two notes, with another two fainter ones above and below that. 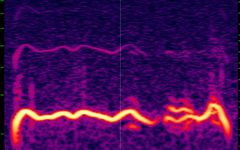 The extra notes look equally spaced in frequency. At the bottom of the first trough about three quarters of the way through, the melody is about 4580Hz, the line above it at 5050Hz and the one above that at 5600Hz, differences of about 470Hz and of 550Hz, so it may be that the swift is frequency-modulating its call, putting a vibrato on the main tone to vary the frequency 500 times a second. In human voice terms, it would mean being able to wobble a sung note up and down fifty times a second.

This *still* means it has two voices, two sound generators: the main one is at about 5000Hz and the frequency modulation (if that's what it is) is at about 500Hz which, to them, is more like growling than singing.

Clever! Now, all that we oh-so-clever humans have to do is understand what they are saying...