The Evenings of Certain Lives 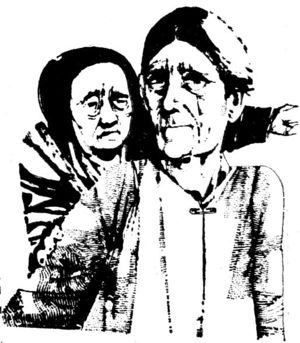 The image accompanying its description in the Radio Times in 1965

The Evenings of Certain Lives is the last[1] of the four Inventions for Radio created by Delia in 1965 in collaboration with Barry Bermange.

The programme is about life at a certain age, not at the extreme point when people ‘just give up and wait’ but, perhaps more poignantly, at the point where old age begins and the body just won't work like it used to and the eyes just won't see, the ears just won't hear, and the memory of what you were is dim.

The Evenings of Certain Lives is about the sense of isolation. And the private agony.[1]

These are the words spoken in the first clip broadcast on Sculptress of Sound, of two minutes and ten seconds, alternating between half a dozen different male and female voices:

“My present age seems to go very slowly. And when I look back over the years, they seem to have jumped very quickly. I can remember things that happened to me when I was fourteen years of age, when I was twenty-four, thirty-four, forty-four, and I used to dread being fifty-four. Now it comes to sixty-four and over and it seems to get longer as the years go by. Time seems to spread out.

It seems to be going very fast with me. Maybe it's according to the condition that I'm in or how I feel at the time but that's how it appears to me.

It seems to go very much quicker.

It's going too quick.

I don't seem to get enough hours in the day to do all I want to do.

I've never got time to do all my things.

I thought I was going to have a lazy time, but it's going too quick.

They seem to fly by.

Time never worries me at all.

Time passes away for me. As long as I've got something to do to occupy my mind and keep on doing it. Time is nothing to me.

The weeks go, from Monday morning you don't realise it then it's Saturday again. Time never hangs on for me. It never has done.

Some days it's a bit boring but I don't think the time drags. Not at all.

Maybe it's according to the condition that I'm in or how I feel at the time.

It seems to be going pretty fast with me.”