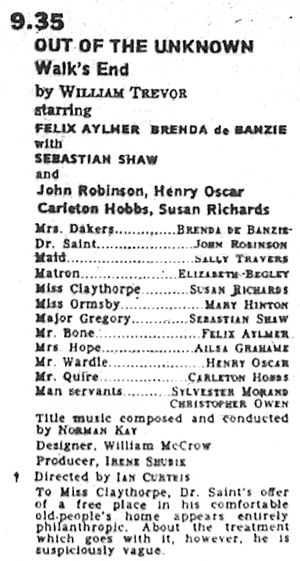 Out Of The Unknown - Walks End (Radio Times programme guide)

Delia is credited with sound for an episode Walks End II by William Trevor[1] produced by George Spenton-Foster[2] for the BBC TV series Out of the Unknown, in which

An old woman is persuaded to leave one retirement home to live in another, only to figure out that the new facility's doctor has dubious plans for all of his boarders.[3]

Old Miss Claythorpe lives alone in "St. Bridget's Home for the Elderly", a tumbledown, depressing and squalid home where the Matron is a secret drinker. One day, she is surprised to receive a call from two strangers, who introduce themselves as Mrs. Dakers and Doctor Saint. They have a proposition for the old lady. If she will come with them to Walk's End, a pleasant and attractive country house where Mrs. Dakers is the Matron, she won't have to pay a penny, and she can her days in comfort. Although she is puzzled at this offer apparently out of the blue, Miss Claythorpe allows herself to be persuaded, and she is escorted to Walk's End in the Doctor's Rolls.

(There she meets the other residents. Among them are Major Gregory, all miltary precision, vague Mrs. Hope who isn't quite sure whether she will have to share a room or not, Mr. Quire who is following a BBC teach-yourself Spanish course - much to everyone else's annoyance, and Mr Bone a retired biologist. It is the latter who has come to some quite definite conclusions about what Dr Saint's mysterious experiments with rats portend. They are all to receive euthanasia, to balance the surplus population. While the others have all more or less come to terms with this, Miss Claythorpe is horribly frightened. She doesn't want to die before her time. Doctor Saint, as soon as he realises what they believe, hastens tearfully to reassure them. He holds human life sacred. How could they believe such a terrible thing? But the assuaging of fears only gives place to worse ones. He is a human vivisectionist. Hastily they try to organise a mass escape. All, except Mr. Bone. He has spent a quiet time in Saint's laboratory and has come up with the truth - a truth far worse than euthanasia. Saint has found a way to keep them alive - not young, but as they are now. They will stay old - indefinitely. Glumly he confronts an endless, and petty, future...)[4]