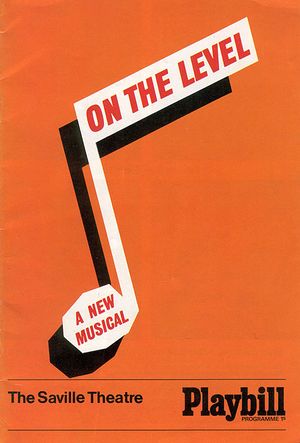 The Saville Theatre playbill for On The Level

Delia and Brian Hodgson, working as Unit Delta Plus, created music and sound effects for Ron Grainer's second play On The Level, a musical which opened in late February 1966 at The Royal Court Theatre in Liverpool[1] and was repeated at the Saville Theatre in London, opening on 19th April 1966.[2]

Delia and Brian spent 67½ man-hours on it between 6th August 1965 and 18th February 1966, working with Ron Grainer, Wendy Toye and Diane Majue,[3] delivered 20 sound sequences lasting a total of 15m18s[4] and Delia and Brian went to Liverpool to attend the opening night and a party on the 25th as guests of the show's producer Martin Landau.[5][6]

Although a newspaper article previewing the show mentions "electronic music in the “Dr Who” vein which owes nothing to the men in the orchestra pit",[7] Unit Delta Plus are not credited in either of the theatre playbills.[8][2]