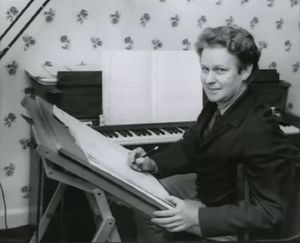 Delia first worked with Ron Grainer in 1962 to realise his score for the Doctor Who theme and in 1965/6 with Unit Delta Plus created 20 tracks of music and sound effects for his first play On The Level.[1]

Ron was so thrilled with the sound of the Doctor Who first mix that he said “Give Delia half the royalties! I'm so pleased with it because I was going to book a band.” He didn't think that what he'd written on his score could be so well done with the equipment we had and he was a very generous person. But, of course, that wasn't allowed as I was only a Studio Manager. [2]

Ron Grainer visited the Workshop twice: once with the first piece of paper, secondly when he came back after a fortnight or so and Delia and I played him the end result. Ron never worked at the Workshop.[3]