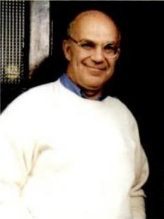 In 1966, Arnold Schwartzman worked as a Concept Planning Executive [1] for Erwin Wasey Advertising Ltd. and commissioned some call signs from Delia and David Vorhaus on 30th January 1966 and the "listening copy" was delivered to him on 3rd February.[2]

A letter from him to Delia and David Vorhaus at Unit Delta Plus, postmarked 29th August 1967, says "I've just heard the tape its beautiful",[3] so either he commissioned a second piece from them or they sent him a demo.