ESL104 is the catalogue number of a 1969 Standard Music Library album of "sound effects". It was:

Recorded while Delia was still employed at the Radiophonic Workshop and working on the White Noise LP. [...] originally released under the pseudonym Russe (a.k.a. Li De la Russe - or "Of the Red" - a reference to her auburn red hair) also features work from David Vorhaus and Brian Hodgson (aka St. George - he was also still under contract to the Beeb!)[1]

This rare mono record was "caned" to provide the music for the '70s television series "The Tomorrow People" and "Timeslip".

The "Delia's ..." tracks derive from her music for the film Work Is A Four Letter Word.

The tracks with links on the titles and spectrograms are the ones credited to Delia. 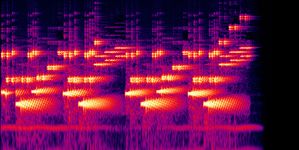 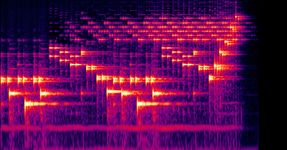