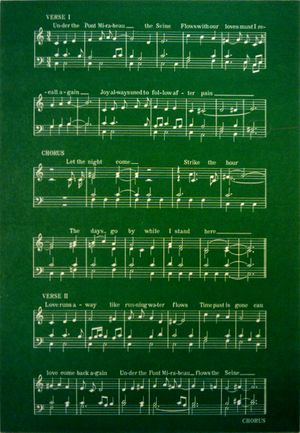 DD115738: Typesetter's proof of the score for Le Pont Mirabeau, with pencilled correction

Delia created Le Pont Mirabeau, which she calls Cubism Song, for "a 1968 Schools Radio programme about Cubism in the series "Art and Design".[1]

“it appears [to have been] written for a 1968 Schools Radio programme about Cubism in the series "Art and Design" [...] There is an off-air recording of most of this programme in the Manchester collection (DD263), and in Delia's realisation of Le Pont Mirabeau it's sung by White Noise vocalist John Whitman. The programme was written and narrated by Edward Lucie-Smith.”[1]

The Radiophonic Database's entry for it is dated April 1968,[2] her handwritten score for the song is dated August 1968.[3] and it was first broadcast on 14th February 1969.[4] Finally, after 7 years of uncredited silence, the Radio Times credits Delia with music:[4] 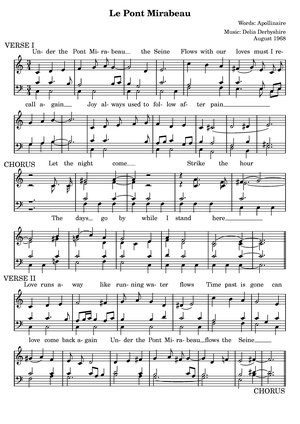 Delia's papers contain the complete typeset score for her musical setting of Apollinaire's poem of the same name, consisting of two verses with a chorus after each verse.

Here is a new typesetting of Delia's proof copy of the score, following Delia's typographical indications exactly and including her correction to the professionally typeset version[5].

In her handwritten manuscripts, the second verse has a different melody fitting the different words.

For the availability of the programme in which it was used, see Cubism.