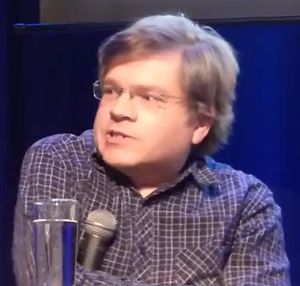 “If you were a child of the sixties in the UK, you couldn't but hear Delia's work. We were surrounded by it but it wasn't often credited. I remember hearing things like The Dreams on the radio in the background and not knowing what it was, but on a Saturday night you got Doctor Who, which was weird music. [...] If you went to school in the sixties, we had a programme called Music and Movement and I remember standing in a playground pretending to be a tree to the sound of Delia Derbyshire. You couldn't but hear this stuff; it was the soundtrack to our lives to a very large extent.
“In 1972 I was eleven years old and got absolutely hooked on Doctor Who and the reason for that was I loved the way it sounded.
“I met Dick Mills at a Doctor Who convention and he invited me to the Workshop to have a look round when I was about sixteen and they couldn't get rid of me. Every holiday from university I was down there. [...] I was eventually commissioned to do Doctor Who.”[2]

When the BBC Radiophonic Workshop closed in 1998 he found the Workshop's 9000 reels of tape, containing most of the Workshop's output and the only existing copies of most of Delia's music, in a dumpster ready to be thrown away. With Brian Hodgson, he hired a "pantechnicon" to save them and eventually the BBC gave him shelf space at Maida Vale to preserve and catalogue them.

“I spent the next couple of years of my life... locked in Maida Vale... basically putting labels on boxes.
“I put together a basic database of what exists. And the deal was that the BBC would give it shelf space, but I would look after it. But it’s not an acquisitioned library and it doesn’t appear on any BBC database or catalogue. I look after it.”[3]

"It took me a while to realise what was going on - she'd ring up, she seemed to be talking at random, and then I realised she'd pick up a conversation exactly where you'd left off. I got used to this eventually, and I used to make a note of what we'd been talking about when we'd finished talking..."[3]

"She once said to me: The best thing my parents ever gave me was my name."[5]

In 1998 he encouraged her to return to public life by participating as a guest at a “Doctor Who” convention in Coventry.[4]

In 2001 he received Delia's Attic Tapes from Delia's heir, made an Initial Catalogue of them, returned to the Radiophonic Workshop Archive anything that belonged to it[6] and, in 2008 gave them on permanent loan to David Butler at Manchester University.

On 5th May 2017, Delia's 80th birthday, a scathing article appeared accusing him of delaying the publishing of Delia's BBC music. The day after he appeared live on radio, and is now the executor of her estate and trustee of the Delia Derbyshire Day charity that helps young musicians.

“If Delia was asked ‘It must have been difficult being a woman’, she would reply ‘No, it wasn’t'. [...] It wasn’t a big deal that it now is. Those who knew her said that she didn’t find it an issue, and so maybe it doesn’t need to play an important part of her story.”[7]