Science in the Shadows 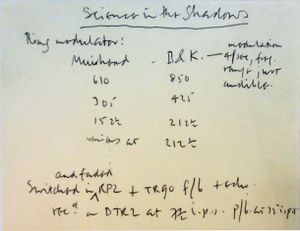 Science in the Shadows was a one-hour[1] BBC TV programme following the Royal Society's publication of a report about the 'brain drain': the mass emigration from the UK of ‘scientists of very high quality’ whose loss ‘left serious gaps behind them’.[2]

The Radio Times described the programme as:

Britain's scientists are among the world's best and their brain power is our richest raw material. Why do so many of them feel frustrated? Is Britain failing to meet the challenge of the scientific revolution which is re-shaping much of the world? In this film the scientists speak out.
Scientific adviser, G. Rattray Taylor
Film editor, Ted Walter
Directed by MICHAEL LATHAM
Produced by GLYN JONES[3]

Delia's papers contain her notes for Science in the Shadows, created by ring modulating the Muirhead and B & K oscillators, recording it at 7½ inches per second and playing it back at double speed.[4]