An unreleased perv-pop classic in the 1966 novelty vein, recorded with Anthony Newley. The future Mr Joan Collins was after an electronic backing track and called in Delia.[2]

This electronic pop song is sung by Anthony Newley who also wrote the words. The piece is composed in a traditional musical way with melody, rhythm and harmony, and the musical parameters are all totally predetermined. The sources of sound are simple sine tones.[3]

The late Anthony Newley told his label that he wanted to do something electronic. So they got on to me. So I produced this bloopy track and he loved it so much he double-tracked his voice and he used my little tune. The winking knees in the rain, and their mini-skirts. I'd done it as a lovely little innocent love song, because he said to me that the only songs are, "I love you, I love you" or songs saying "you've gone, you've gone."

I'd written this beautiful little innocent tune, all sensitive love and innocence, and he made it into a dirty old raincoat song. But he was really chuffed! Joan and Jackie Collins dropped him off in a limousine at my lovely little flat above a flower shop, and he said "If you can write songs like this, I'll get you out of this place"! It was only a single-track demo tape. So he rang up his record company saying "We want to move to a multi-track studio". Unfortunately the boss of the record company was on holiday, and by the time he returned Anthony Newley had gone to America with Joan Collins, so it was never released.[4]

Delia spent 64½ hours working on this piece every day from the 2nd to the 11th of August 1966 including a single monster session of 16½ hours on the 9th.[1] and a "radical rethink" on the night of Wednesday 10th[5]

The author of delia-derbyshire.org writes:

Delia was initially disappointed with the recording, but as the years passed she became exceptionally fond of it.[2]

Delia's backing is in a mixture of 3/4 and 13 time. In the "Rain keeps falling, no one's calling" phrase, she adds pre-echo with a delay of one and a half notes to turn a simple melody into something more complex. 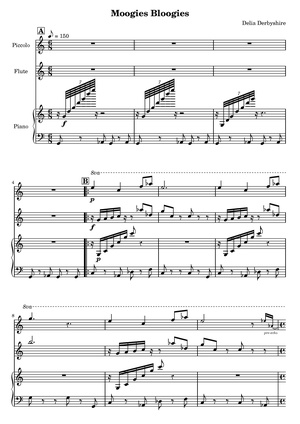 Reverse-engineered from a spectrogram with semitone grid and available as:

There is a folder "Newley" in her papers containing: