Narrator: February '66, the Italian Institute, London. Luciano Berio is playing a tape of his recent piece Labyrintus 2 as part of a lecture. A couple of latecomers are shown to the front row and there's a commotion as the paperazzi swarm around the young man now sitting. This visitor is one of the most successful composers of the twentieth century. His name is Paul McCartney.

By this time he's the only Beatle living in London and he's been hanging out with a hip crowd of writers and artists. He's been experimenting with his tape recorder at home and within a few weeks of the Berio lecture brings a bag of tape loops to Abbey Road to the first recording session for the Beatles' new album.

Later in the year McCartney travels to Putney to visit an electronic music studio he's heard about. He meets the owner Peter Zinovieff and his two partners in Unit Delta Plus, Brian Hodgson and Delia Derbyshire, both moonlighting from the BBC Radiophonic Workshop.

Delia needs no introduction to Berio from the lovable moptop though. She'd been Berio's assistant at the Dartington Summer School back in 1962. For his part, Berio has been working with tape and electronics since the mid-fifties.

[??:?? Something from Electrosonic as background

[2:10-6:05] It's 1958 and we're in the Philips Pavillion at the Brussels World Fair, Expo 58. Along with six hundred other audience members, we're waiting for one of the forty daily performances of the eight-minute Poème Eléctronique, a milestone in multimedia art, intended as an artistic symbol of the technological advancement at the Dutch electronics company, Philips. While we wait for the Poem Electronic to begin, the sonic sorbet we're hearing [the background music at that point] is Concrète Péache [?], a tape piece constructed from the sounds of burning charcoal by [Iannis Xenakis]. He's also played a crucial part in the design and realisation of the pavillion building itself, which has been distantly overseen by the architect Le Corbusier. The music, or "organised sound", for this audiovisual spectacular has been composed by the 74-year-old Edgard Varese who, by this time, has been talking about the potential of electronic music for more than forty years. His new piece is a fluid mixture of electronically-generated sounds and manipulated recordings and it will soon sound forth in spiralling trajectories from more than four hundred speakers positioned all around the curved, stomach-like walls of the pavillion on which giant photographic images will be projected in an automated sequence.
A short distance away is the Etonium [?], another new building which epitomises the optimistic 1950's techno-futurism that's on display at this Expo. The building's structure mimics the shape of one of the crystal forms of iron, with nine huge metallic spheres joined by cylindrical links. Sitting on top of the one hundred and two metre tall structure is composer Darius Sitanovà [?]. For this cheesy publicity stunt, he's playing his piece Song for Different Eternities, scored for the Ondioline, an electronic keyboard instrument that's been around for nearly twenty years. It's already appeared on a number of pop records. Jean-Jacques Perrey, a noted exponent of the Oldioline, is also at the Expo to demonstrate the instrument. We'll meet him again later. In 1958, electronically-generated and manipulated sound is already well-established, not least as a science fiction signifier, in mass-appeal films, television and radio and, by the time of the Expo, substantial electronic music studios have been established in most European countries as well as the United States, Japan, Canada, Chile and Argentina.
In England, the BBC Radiophonic Workshop is in its first year of operation, and one of the key figures in its early development, Daphne Oram is also here for the sights and sounds of the fair. So too is her countryman, Tristram Cary who's worked in his own studios since the forties. And there's a couple of Cambridge students who travelled to the Pavilion together, Jonathan Harvey and Delia Derbyshire.
Pierre Schaeffer, John Cage and Karlheinz Stockhausen, three crucial figures in the history and development of electroacoustic music, and also at this Brussels World Fair. They're joined by other notables in this rapidly-growing art: Luciano Berio, Mauricio Kagel, Bruno Maderna, Henri Pousseur, Henk Badings and Luc Ferrari. 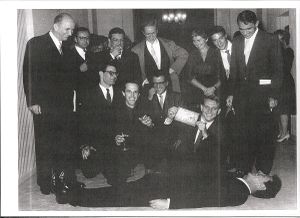 They all pose for a photograph. Cage, grinning, lies supine in the foreground while the others look on and smile. It's a remarkable frozen moment.

[19:55- Brian Hodgson talking about the Motosacoche, Ron Grainer and the creation of the Doctor Who Theme.]

[24:30 Talks about callsigns, with Delia's Fresh Aire in the background]

[27:17-29:35 The Doctor Who Theme, then Brian Hodgson describing Ron Grainer and the creation of the Theme]

Narrator: Delia Derbyshire did more than the Doctor Who Theme, of course. Soon after her arrival in 1962, she was producing distinctively witty and skillful pieces. Inevitably, though, with the inevitable pressure of deadlines, the Workshop composers looked elsewhere for interesting collaborations, not to mention extra cash. Towards the end of 1965, Brian Hodgson and Delia Derbyshire had started to hear about Peter Zinovieff's large electronic music studio in Putney. They decided to join forces as Unit Delta Plus, with Desmond Briscoe allowing Brian and Delia to moonlight from the Workshop with a nod and a wink.

Brian Hodgson: Delia and I did all the commercial stuff and Peter was more interested in the research.

Peter Zinovieff: They'd heard about what I was doing and they thought that I'd be very good at joining up with them to make an independent company to make jingles and that was our aim. I didn't fit in with that philosophy at all because I kept wanting to do more elaborate things and have more control over the equipment and they really wanted to make money. So we did one or two jingles and then gradually we drifted apart.

Brian Hodgson: Then we had a bust-up and decided that he was going in one direction and we were going in another direction and then Peter got heavily into the synthesizer manufacturing bit and created EMS.

Want to transcribe the rest? Get in touch!

"Tom Hone's book on Electronic Music" mentions Delia and has a quote from her on the back cover, mention of